Who knew ambling along at thirty miles per hour, hunched over a rental car steering wheel, squinting into the dark beyond the headlights could be so exciting? I jumped back with a startled scream as an elk ambushed me from the surrounding forest, my foot slamming the break pad, cell phone clattering to the floor before I could grab it and snap a picture.

Officer Jones had warned me about this as he handed me a ticket for speeding and recommended I get a hotel in John Day. “Boise’s a good five hours away and you’re gonna have deer, elk, antelope, all kinds of things coming out on the road after dark.”

Why was I in this situation? Speeding and dodging beasts of the forest. What could be so important? Breakfast with my grandma, but really I blame the GPS. The thing about GPS is that it’s an adventure in itself. Leaving Portland I input Painted Hills as my destination, and was surprised when I ended up atop Mount Hood! I pulled over a few times at outlooks to take pictures reminiscent of what I see on IG (Instagram) under #pnw – think haunting moody fog, pine trees, high up view of mountains or valleys. It began to feel oppressive though, miles upon miles of muted wispy grays.   I devoured asphalt desperate to escape it and get a glimpse of the sun. Is this life in The Pacific Northwest I wondered? I decided that IG is so popular there because they venture out once a week in the horribly depressing weather and then spend the remaining six days huddled inside on social media.

The sun broke free of the clouds at Warm Springs Indian Reservation, officially the friendliest place I’ve ever been to. I stopped there for gas and not only did the other patrons hold open the door for me but literally everyone leaned out of their cars to say cheery “hellos” when I walked by. I felt an overwhelming urge to stop at their large casino with rental cars and RVs parked outside, just so I could run inside and beg them to take my money in exchange for more of their unexpected kindness.

Painted Hills was calling though. It’s marketed as one of Oregon’s 7 natural wonders, and as a tourist driving in that general direction how could I not stop and see them? Painted Hills, I realized turning a corner and finding myself face to face with them, were the rings of Saturn fallen atop hills of crimson and beige. 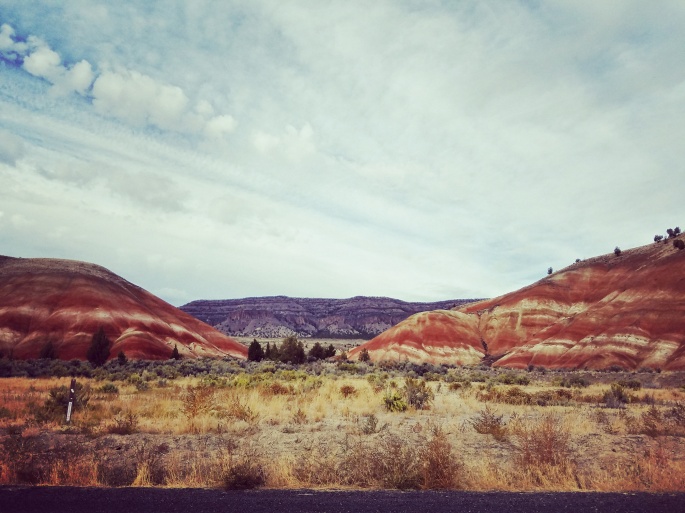 The GPS guided me past the initial one and on to the hiking trails we went. Gids and Rossi ran down them excited to be out of the car. Gids signed his name on the Visitor log, a big X that took up three spaces. When it was time to leave I opened the GPS, typed in Boise… and it dumped me. It said it couldn’t find me! I’m here! I was just here, you were just telling me where to go! You know where I am, I thought frantically. Ok calm down. Boise is east – drive east. 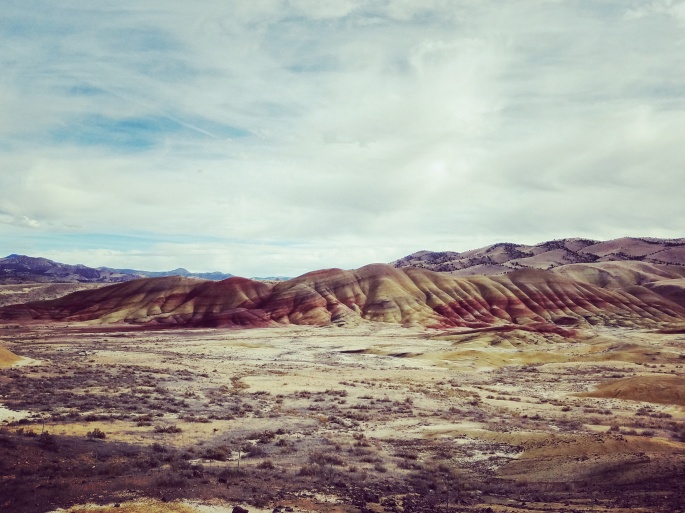 After a hundred or so miles of driving east and seeing not a soul, let alone a town or a sign letting me know where I was, the sun had started to sink. I was going to be alone on an endless unknown road in the dark. I was a bit happy when the tailgater showed up, I wasn’t alone! But the little black car with what appeared to be ski racks atop it was following me so aggressively that I began to feel tendrils of fear snake through me. I sped up desperately scanning for a spot to pull over and let them pass. Right when I spotted one and turned on my blinker the sound of sirens filled the air. I pulled over absently wondering how far the cop had to drive everyday to set up that speed trap.

Officer Jones was a handsome young man. It was the first time I had been pulled over by someone I reckoned to be younger than myself and I felt like I was his grandmother. When he asked if I knew how fast I was going, I played a sad song on my little violin about the GPS, approaching night, and him tailgating me. After chitchatting about our kids, he had some Rossi and Gids age, he sadly lamented a ticket was mandatory given the speed I was driving. He then recommended, as the roads were in fact dangerous at night, that I get a hotel room in John Day. It was either that or a five hour drive to Boise.

We stopped at the Dairy Queen in John day. The kids ate chicken strips and fries, ending up with ice cream mustaches and beards, while I stared out the window at a stunning sunset. I watched the way it turned an old brick building across the street from a beastly eyesore into a mysterious beauty and I mulled over what to do.

I popped a caffeine pill and hit the road. Not just because I feared we would never leave the hotels loudly advertising their vacancy with bright neon signs, but because I had promised my grandmother in Boise I would have breakfast with her the next morning.

Officially I would never make that harrowing slow drive in the dark where wild creatures suffering from death wishes ambushed me every 20 miles. Unofficially… it was so exciting I’d pay to do it again! We arrived in Boise just short of midnight (sorry Jennifer!) and managed five hours of sleep before meeting Grandma for breakfast and coffee…LOTS of coffee. 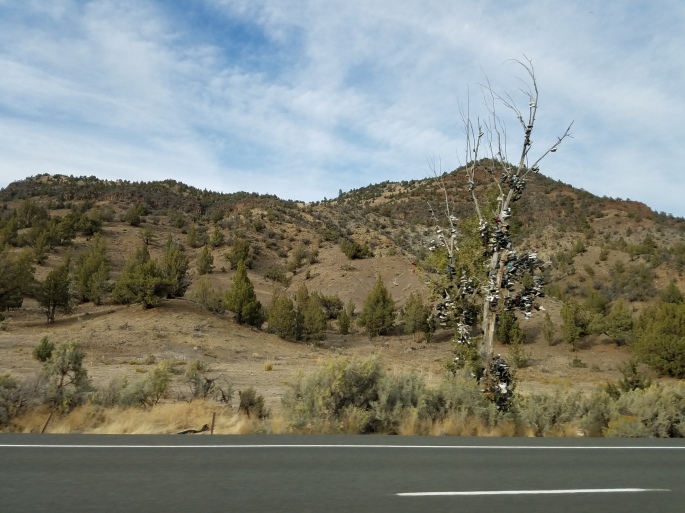 Thankyou so very much for taking the time out of your day to read this! I know it’s a valuable commodity and I greatly appreciate it!!! I must ask though that if you find yourself on the same road you stop and take a better picture of the shoe tree than I did, and send it to me!  I regret speeding past such a kitschy thing, and wish I’d stopped!

2 thoughts on “The Road To Saturn’s Rings”