If you go some miles up the Hanapepe river you will reach Manawaiopuna waterfall. You may know it as Jurrassic Falls. Yes! That Jurrassic Falls! If you want to see pictures here’s a link to the photo gallery of the tour company that goes there. https://www.islandhelicopters.com/galstart.html

I’m not affiliated with them, I just didn’t want to get in trouble for posting pictures I didn’t take.

Whenever we go up the Hanapepe River in my mom’s kayak, and the water gets shallow, I want to tie it to a tree and hike to that epic waterfall. However, once the river is no longer navigable by boat it becomes private land. I have it on good authority that they don’t allow trespassers. It’s patrolled by paniolo’s (Hawaiian cowboys) who chase you down on horseback, handcuff you, and give you a ride back out of the valley to the nearest police officer.

So when it gets shallow we turn back and float downriver past the Hanapepe Cliffs. I love the reflection they cast on the water, and the deep red hue they take on at sunset. 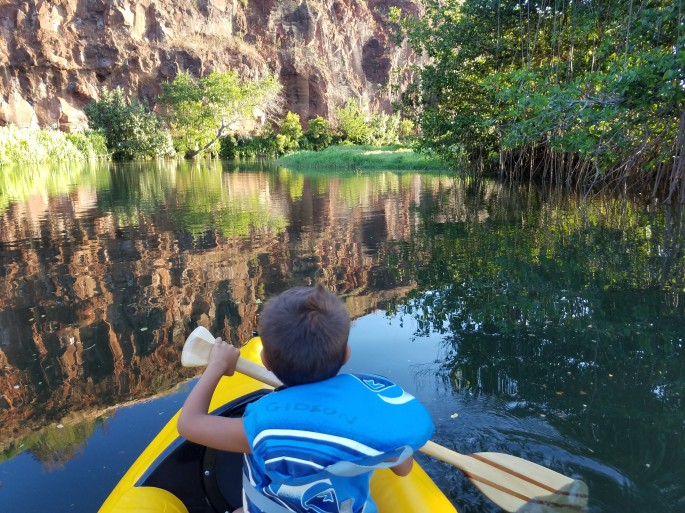 They make for great photographs, I feel a bit horrified every time I press the shutter button though because those buildings on top are my sons kindergarten.

The last time I photographed them was because I needed to build and island in Photoshop.

I wrote a book about common Kaua’i tide pool animals called Tidepool Island to help fund my cousin Leona Grace McKee’s heart surgery. Adobe Photoshop was used to make it, I spent two weeks watching video tutorials on how to create images. There was some for making islands out of turtles, skulls, and elephants. They inspired me to create an animal island.

For the background I put my phone in a plastic container and took pictures of small waves hitting it to get that above and below water look. 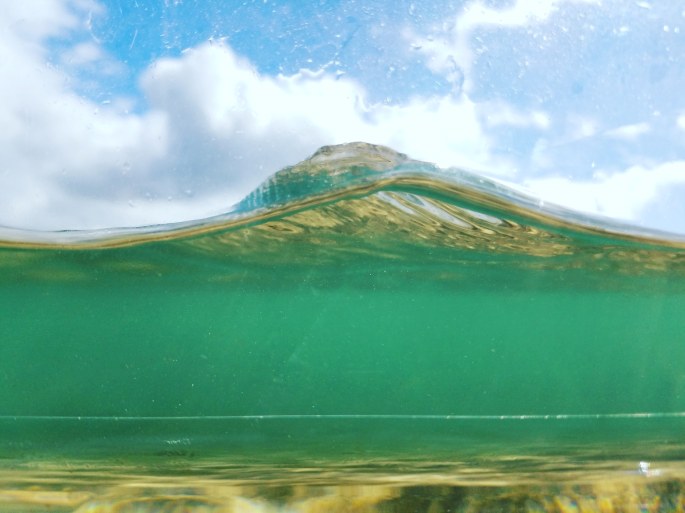 Then to hide the container lines, I added this picture to the bottom of each image. 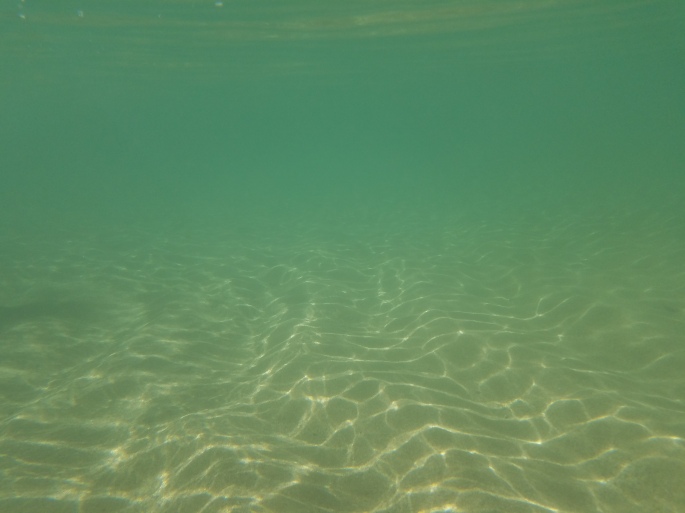 I took hundreds, maybe thousands of pictures of potential islands. Pictures of Sea Snails, Octopuses, Turtles, Squid and Monk Seals. None of them were right though. Then one evening Gids, Rossi, and I were out looking for Mantis Shrimp when a Jeweled Anemone Crab ran past us.

Jeweled Anemone Crabs are Hermit Crabs who tickle Calliactis Polypus or Hermit Crab Anemones off rocks and attatch them to their shells. On rocks, the Hermit Crab Anemone lies flat, stretched out thin, looking like muscles stripped of skin. After the crab acquires it, the sea anemone gets a fast ride to all the best food spots and the crab gets a protector who shoots pink threads out like silly string at whoever bothers it. It’s not the only crab who uses sea anemone’s for protection, the Teddy Bear and Hawaiian Pom Pom crabs do too, but it’s the only one I’ve seen using the Hermit Crab Anemone.

I scooped the crab up and put it in a container to take pictures. It scrambled around, swiveling it’s long candy cane eyestalks, watching me the whole time. It had so much personality! The Sea Anemones on it even reminded me of the volcanoes that make up the Hawaiian Islands.

A few days later walking along the Hanapepe River, I decided the cliffs should be part of the island too. We pass them every day on the way to the beach, and I wanted to share that part of island life with everyone who read the book. I duplicated this image and mirrored the copy to make the island.

The palm trees are all from these two pictures, the first at Anini Beach, and the second at Salt Pond Beach Park. After removing them from their backgrounds I made multiple copies of each one. 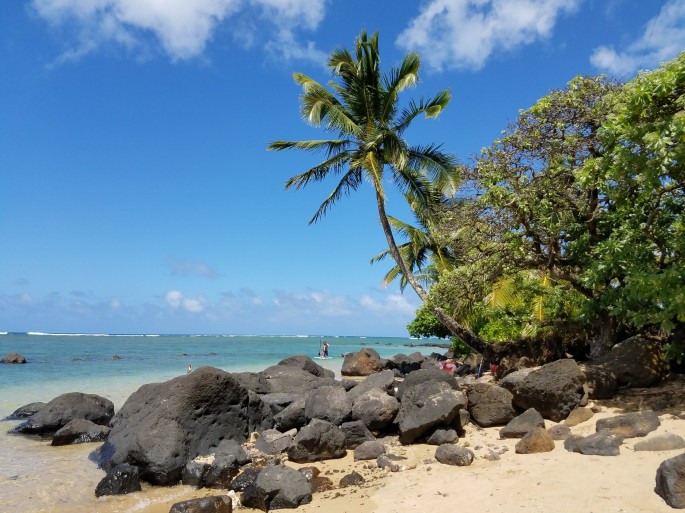 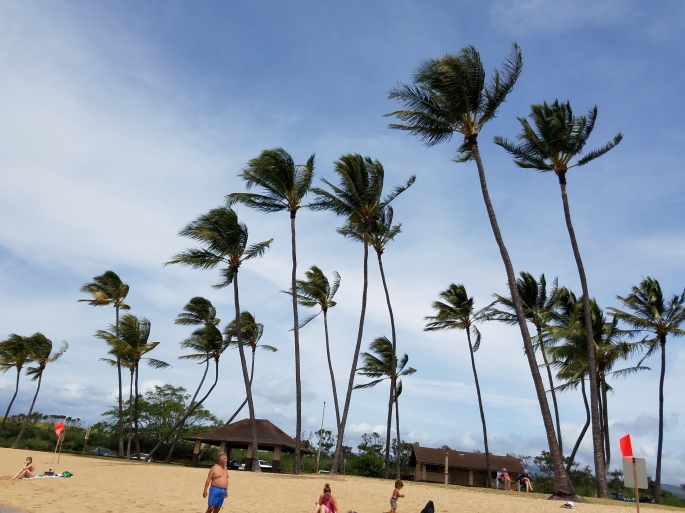 The background sky and rocks behind the island is this picture.

Just off the Kapaa bike path right before Kealia Beach, it’s one of my favorite tidepool areas, and where I first saw orange feather duster worms. 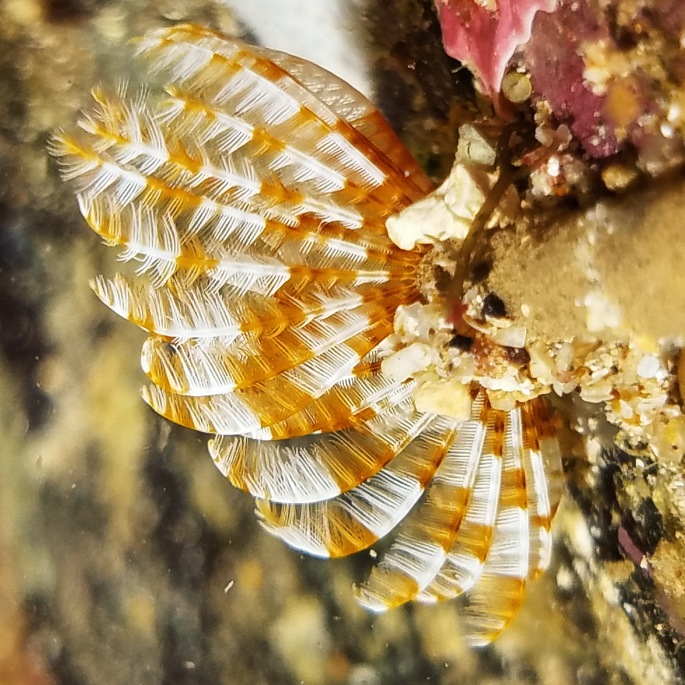 Since then I’ve seen them all over the island, but that moment of awe and amazement that something so strange and beautiful as them exists is one I haven’t forgotten.

The boat the kids are riding in the background is from this picture. 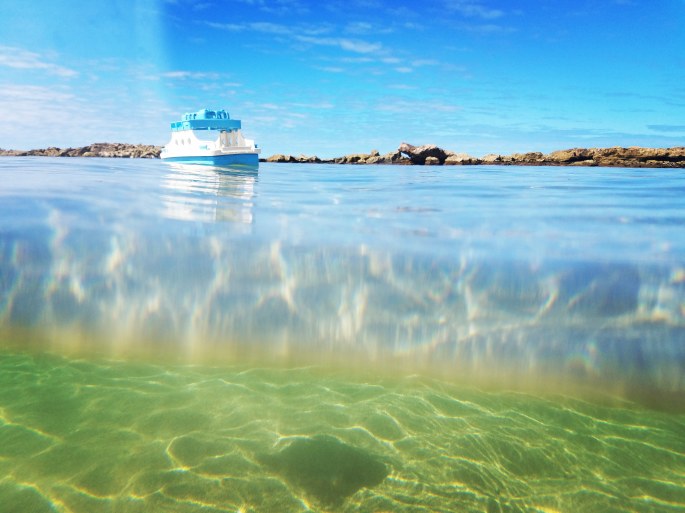 I removed the boat and it’s reflection from the picture and added it to everything else. To get the kids sitting on it, I had them sit on a bench in our yard, then removed the background and shrunk them down.

Growing up things like the Bermuda Triangle and ship graveyards fascinated me, so I made one for the back cover. The boat graveyard is made from this picture of the Nippon Maru, a Japanese sailing ship used for training. I removed the ship from the background and made multiple copies of it, tweaking each version. 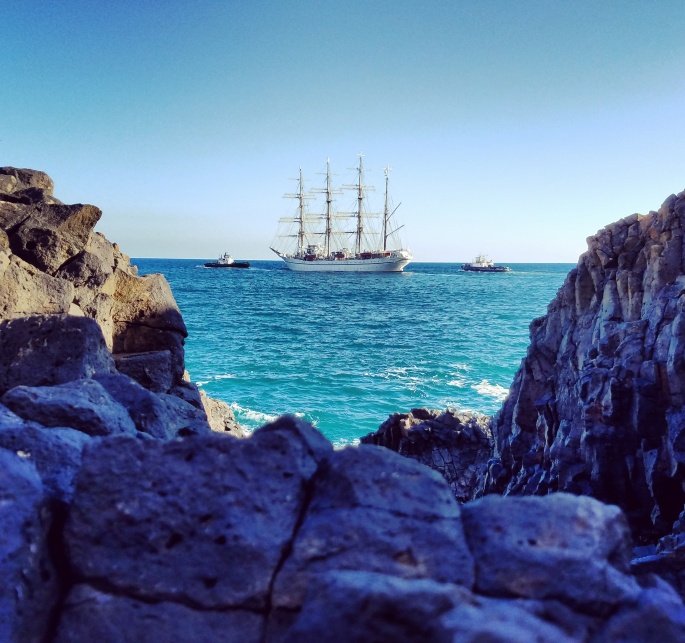 The kids and I went to Nawilwili Lighthouse and watched it leave Nawiliwili Harbor a few years ago. I could barely keep Gids from jumping off the rocks and swimming to them because he thought they were pirates. Here’s a link to a newspaper article about it, there’s a cool picture of all the sailor’s on the masts when they left!  http://www.thegardenisland.com/2017/01/10/hawaii-news/nippon-maru-sets-sail-for-oahu/

That’s it for the covers! Thank you so very much for taking the time to read my making of Tidepool Island cover post. I was constantly thinking of YOU my readers when I was making the book and I’m excited to be able to share how it was created now that it’s finally done!

Copies are available at Amazon.com
Kokee Lodge
Na’aina Kai Botanical Gardens Gift Shop
or directly from me if you live on Kaua’i!

Lastly, THANK YOU!!! To everyone for your support of this fundraiser for my cousins heart surgery. A few of you have been asking me how she’s doing, I’m putting the GoFundMe link here, they post regular updates about how she’s currently doing there.

One thought on “Tidepool Island, The Covers”